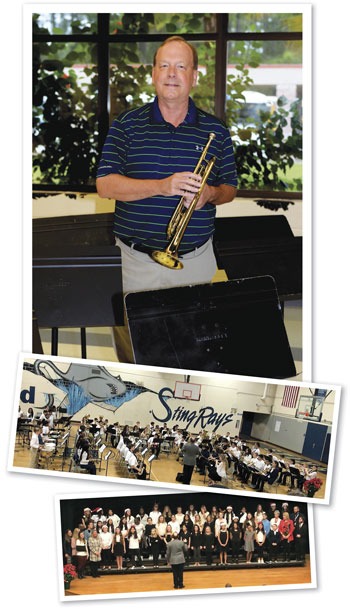 “Never doubt that a small group of committed citizens can change the world; indeed, it’s the only thing that ever has”. A wise quote by American author and cultural anthropologist, Margaret Mead. So, if it indeed takes a village to raise a child, you’d be one happy camper having a teacher like James (Jim) Waechter on your street.

Music is more than Jim’s  33-year vocation; it’s his adrenaline! With his experience playing, directing and organizing music, he understands the magic music can create. As Hilton Head Island Middle School’s (HHIMS) full-time Band Director, musical duties fall under his able tutelage. This includes all band and chorus responsibilities. Jim’s excitement has had a positive impact on student involvement. Upon Jim’s arrival in early 2017 the middle school band had only 33 participants. It also had an insufficient number of available instruments, with some too damaged to play. Thankfully this changed when Jim began working with Jerry Portman of Portman’s Music in Savannah. His music sales representative, Johnnie Kennedy, suggested the relationship, and Jim jumped on it. This successful endeavor made it possible to rent 60 instruments through the end of that first school year! Classes were re-organized, and a new attitude emerged among the student band community. Jim’s leadership re-energized the program, helping them to gain and maintain over 125 students; an expected 175 students will be playing and singing this school year!

When asked how students perceive him and his teaching style, he humbly responds,“I think the kids know I am passionate about what I do. I just create the environment, then hope the situation and performance will motivate them.” Jim believes young people today can get technologically lost in their own world.“But they want to be part of something,” he says. “Band is a good peer group, and they also have to put in the work.”  His students’ hard work is paying off. With continued assistance from Portman’s Music this past school year, HHIMS filled the gymnasium for a musical performance in December; 127 band students, 45 orchestra and 48 choir! “They were able to play and perform for a room filled with their classmates and family,” he smiles. “Many for the first time.” This signified a new beginning; one of pride in his students’ personal abilities, and hopefully a community in recognition of the strides they have made.

“If you want all aspects of your community to thrive, schools must be strong,” Jim says. His passion is for putting instruments in the hands of every student who wants to learn! His ‘village’ is his school, and he loves the commitment to betterment he has witnessed from many in the school system since his arrival.

Jim’s musical beginnings came at 7 years old when his father bought him and his siblings a piano. Glenview, Illinois was his hometown, and it was here his competitive spirit grew. Jim’s ear for rhythm and his talent to perform brought him to his mastered instrument, the clarinet. He made First Chair Clarinet as a sophomore—over upperclassmen! As a high school senior, Jim proudly served as Drum Major. He was then off to the University of Illinois, where he received both his Bachelor and Master degrees in music education.

Jim met his wife Jackie in St. Louis, and she remains his biggest cheerleader, supporting him alongside their 10-year old son, Jack. His career at Ladue Horton Watkins High School in St. Louis spanned a total of 33 years, 29 in the classroom.  Many hats were worn: band director, pit orchestra director for school musicals, as well as managing the concert, pep and marching bands. During the last five years at Ladue, Jim served as a consultant as the District Music Coordinator and Department Chairman.
He accomplished everything he set out to do, and moving to the Lowcountry became his next adventure. But he admits, after several years, he missed the classroom. His eventual acceptance at the middle school has been one of great excitement. It is now also of great importance to Jim that the program continues on its upward swing toward growth and success. Money is always needed in an effort to keep instruments in his student’s hands. “No child should be denied the experience music brings,” he says. “…or really anything, be it sports, or other school activities.” He continues working hard to that end.

Please don’t hesitate to contact Jim, or his Principal, Patricia Freda, to make a donation. Any support the community can provide is greatly appreciated. Together they have pledged to continue his vision of expansion—just changing a small corner of the world, one song at a time.