Life is an Essay Test 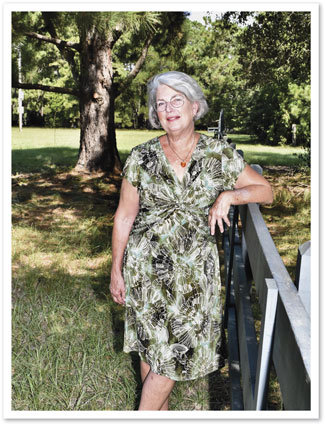 Elizabeth Robin was a high school English teacher who only gave essay tests. “That way students had to convey what they thought,” she said. A deep thinker herself, multiple choice was probably just too cut-and-dry. Looking back, it all makes sense. Being a budding poet, unbeknownst at the time to even herself, pushed her to seek answers that explored the full range of possibilities far beyond a, b, c or all of the above. She loved teaching and excelled at it.

Elizabeth lived the world over as a “Navy brat” with parents who not only insisted she could be anything she wanted to be and do anything she wanted to do, but they were also living examples of this no-ceiling mantra. She was fluent in four languages by the age of 10. Her father, a NATO Liaison, carried on adult conversations with her when she was just a young girl, encouraging her early on to think, find her voice and speak her convictions. Her mother, whose life was cut short when Elizabeth was a mere 15-years-old, gave her books, took her to plays, movies and every museum in Europe. “I feel like my mother knew she wasn’t going to be around. She packed a wallop in 15 years!” Elizabeth said.

If only every daughter could have this sort of foundation.

None of this, however, kept her from experiencing the usual perils of life. First, she didn’t know what she wanted to be or do and changed her major at William and Mary College three times. Facing Senior year with no direction—or possible job—she decided to give student teaching a try—something she was less than thrilled over. “I hated kids and never wanted them. I had no idea I would like kids. I was a student teacher for a semester and loved working with high schoolers—the teenage mind is fascinating! Thus started a 35-year career as a high school English and psychology teacher, where she helped a number of budding writers find their way one complete sentence at a time.

Although Elizabeth expertly taught thousands of students to hone in their writing skills, it did not allow her to hone in on hers. “You can’t be yourself in teaching because you can’t infuse your opinion about a book, poem or a story. A teacher’s job is to ask questions to get the students to look deeper into what they are trying to learn and allow them to form their own thoughts and conclusions,” Elizabeth said. However, when she retired she got serious about excavating her own skills and dug into a few juicy writing projects and adventures.

A decade ago, Elizabeth had never written a poem. “If you would have told me 10 years ago I would be a published poet, I would have laughed,” she said. “I wanted to follow Pat Conroy’s lead and get fired from my teaching job and write a New York Times bestseller with movie options,” she added as the sarcasm frolicked upon her smirk as if it had escaped from somewhere much deeper than her tongue. Elizabeth is funny, quick, whip smart and yes, sarcastic.

She and her husband George, also a dynamic and beloved teacher, found themselves on Hilton Head Island buying their retirement home and starting a new phase of life. Elizabeth got involved in several writers’ groups and begin pursuing the passion of writing for herself that she had poured so wholeheartedly into her students for practically a lifetime. But everything changed when George was diagnosed with melanoma and died shortly after. He was the love of her life, and she has felt sad and empty ever since.

Writing became Elizabeth’s way to heal, serving as her anchor to stay connected to the earth. “Poetry is a way to express emotionally what I am going through, Elizabeth explained. I feel writing is a self-centered act. It’s the stories I have to tell. I don’t care if they will be marketable. It’s just something I need to say, and I write them because it gives me a chance to say it right.”

“A poem is a very compressed story,” she said. In fact, many of her poems have started as essays that Elizabeth tried to frame into a stories but it wouldn’t happen. “Think how difficult it is to convey…tell a story in that little of words,” Elizabeth said, as she pulled out her journal to take a peek. The distant open book revealed pages filled, front and back, with tiny, perfectly lined, neat handwriting. This must be her umpteenth journal.

After George’s death in January 2017, Elizabeth’s grown children came to help one by one. One of her daughters saw her manuscript for a book of poetry and encouraged her to submit it to publishers. In reading a manual Hospice Care of the Lowcountry had left for her, a checklist for dealing with grief advised to do something for self care. Two weeks later, Elizabeth sent the Silk Purses and Lemonade manuscript to five poetry publishers. “I had a full-length book of poetry and was collecting rejections. By June I had received four,” she said. Toward the beginning of September Elizabeth finally received word from the fifth, an email from Finishing Line Press. They were taking her book!

“I always wanted to see if I could do it—to actually get a chance to do what [my students] were doing,” she said. Now with the publishing of her second book of poetry, Where Green Meets Blue (Finishing Line Press, 2018), it’s pretty clear Mrs. Robin should give herself an A.

A Simple Pleasure
by Elizabeth Robin
This poem was written on a day Elizabeth says she could not find gratitude. She uses this selection as an example in her Writing as Healing workshop. (typed as published—Silk Purses and Lemonade: Finishing Line Press, 2017)
today i found that sock
the one that disappeared in the laundry room months ago
the one I sifted and sorted and searched to recover
the one that was cushy and fuzzy and warm
the one that brought piggly wiggly joy
reunited with its lonely mate
the one who’s been waiting, alone in that dark cold drawer
abandoned twin haunting the sock section—
so patient, trusting her match would return some day—
taunting my helplessness, my haphazard wardrobe control
and just when i’d abandoned all hope, there, just there
inside the form-fitting folds of last season’s sheets
there, yes there, better than graduation and trophies
and christmas morning
euphoria, because today
i found that sock

According to Elizabeth Robin:
• First grade teachers are the most important people in the world. Think about it. They set up everything!

• I’m so proud of George. He was an award-winning teacher of videography, film studies and drama, directing 92 plays throughout his career and enjoyed being a substitute teacher for special needs classed after retirement.

• Teenagers are very tricky people; they are all giggling like they know something you don’t.

• I’m blessed because everyone I’ve had in my life who loved me were/are just amazing.

Unbelievable: Elizabeth and her black-lab mix, Byron (as in Lord) camped across America last summer:19,418 miles; 31 states; 29 national parks; 24 cities; 1 woman; 1 dog. This is a whole other story—one that needs to be told in her own words!