A Coach with the Soul of a Philosopher 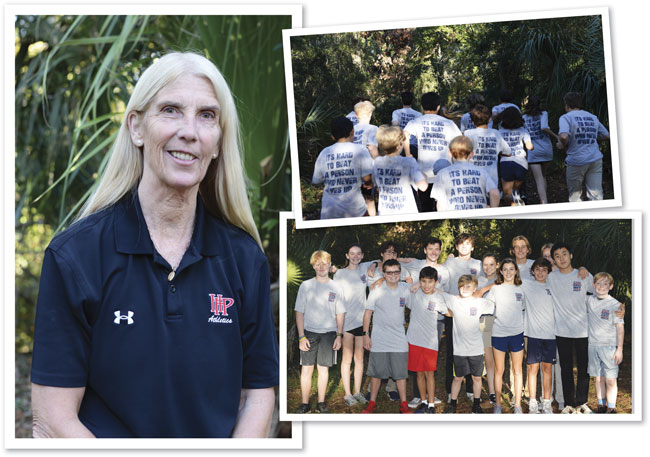 A mama bear is how varsity coach Liz Nash describes herself, and it is her mama bear instinct that nurtures, teaches, protects and encourages her students. She has more than 20 seasons of coaching under her belt at Hilton Head Preparatory School, and this year 45 boys and girls are in the cross country program. Most of them have been with her since the sixth grade and many are now juniors and seniors. She loves watching them grow up.

As a coach and mentor, she strives to help students bring out the best version of themselves, and she’s the real deal. She walks the walk modeling positive behavior. “I have high expectations for these kids to become people who do the right thing. Reward good behavior and raise them up to become good citizens.” She started the “I Am Prep” program in 2013, and their motto is “Choices Determine Character.”

“Leaving a positive footprint is important. Live your truth. I teach them to compete, but with compassion—to prepare them for the real world,” she said. Liz humbly threads important life lessons into her interactions, especially service to others without expectation of reward.

The road trip to the annual cross country state meet is the pinnacle of success for the top seven boys and top seven girls. It’s not only a time of camaraderie and competition, but an opportunity to teach. It’s tradition that the night before the race, runners gather with Coach Nash to learn about an inspirational person to whom they will dedicate their race and honor. It may be someone in the community who is battling cancer, for example. Dedicating a race to someone in need pumps the runners up with motivation because they will now run with heart and purpose. Runners are asked to go back to their rooms and write letters to this person, and these letters serve as their “ticket” to breakfast the next morning. Liz said that one gentleman, who eventually lost his battle with cancer, would read those letters over and over every day until he passed away.

She loves inspirational sayings and quotes; they are all over her house. She incorporates them to inspire her runners to be their best, “whether that is the best student, the best teammate, or your best self,” Liz said. She writes new quotes on weekly practice schedules, and each year team members receive two t-shirts with inspirational messages. This year’s shirts say: “It’s hard to beat a person who never gives up,” and “Show Up!”

“We have had a lot of discussion about what it means to ‘show up,’” she said. “When I mentor, I’m not just going to tell you something, I will show up for you. I work with very competitive kids and with young kids who can’t even run around the driveway. I want all of them to think running is fun and to value their fitness. Too many coaches use running as a form of punishment.”

Coach Nash wants children to prioritize their health, and that includes making good social choices about cigarettes, alcohol and drugs. “If you know better, do better. And that means not taking the path that everybody else is taking. Kids mentoring kids is super powerful. Kids who are cool and respected are great messengers,” she said. “They can really offer game-changing moments.”

Liz’s inspiration and role model was her mother. “She was the epitome of unconditional love,” she said. “She was a positive cheerleader who taught me there are no do-overs and that the biggest thing we leave behind is our legacy. My kids are great… and they are my report card. I am my mother’s report card, so I always ask, ‘What would Mom think?’”

Caring for her mother in the last years of her life was one of the most difficult things Liz has ever done, but also “the most right thing,” she explained. “Nana lived with us, and this was a good example for my kids. I learned so much from her, and I have a soft spot for elders now. She was vulnerable, and I learned how important it is to give a sense of control and purpose, while keeping them safe.”

“It opened my eyes to what the last chapter of my life is going to look like. Now I ask myself whose life have I helped today? The end game now is a different finish line from when I was raising kids.”

• As of this printing, she is becoming a grandmother for the first time. Her son, Danny and his wife are having their first child.
• One of Liz’s pet peeves is arrogance. “Humbly do what you do and never act to impress,” she advised.
• Coach Nash recently added a new workout partner to the team—a Basset Hound named “Coach!” She adopted Coach after her mother passed away.
• Liz grew up in Atlanta, but has been in the Lowcountry for over 30 years. Her kids, Danny and Maggie, grew up here. Danny now lives in Gainesville, FL, and Maggie is in Greenville, SC.
• She is not only a coach and middle and lower school athletic director, she is also a property manager and realtor. “As a realtor these aren’t just houses to me. They’re people’s memories and a chapter in their lives.”