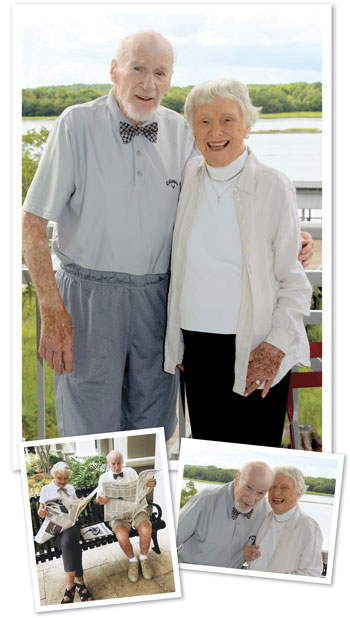 When Pink Magazine publisher Elizabeth Millen first met George and Jean Lumley, they were reading the newspaper together on a bench in the entryway of Bayshore Retirement Community. Not a particularly unusual sight, but Elizabeth was struck by the genuine affection and contentment they radiated as they sat together on the bench. She stopped and introduced herself and soon learned that this couple, nicknamed ‘the lovebirds’ by Bayshore residents and staff, was a success story to be sure, but one with a slightly later start than Elizabeth had imagined.

George, now 94 and Jean, now 100, have been happily married for 23 years, meaning that they were in their 70s before they ‘took the leap’ as George charmingly puts it. Long time neighbors before fate stepped in, George and Jean’s story shows it’s never too late for second chances.

Their lives share many similarities. Both moved to Sea Pines following retirement—George and his wife from New York and Jean and her husband from New Jersey. Both enjoyed active lives filled with family, work and travel. Both have a creative side—George, a trained architect, has a love of drawing, Jean, a talent for painting and quilting.

They also lived across the street from each other on Governors Road for over a decade, exchanging friendly greetings from afar but little more. However, in 1995 that would all change when George and Jean both suffered tragic losses within the space of a month. On Father’s Day, after 54 years of marriage, Jean’s husband passed away. Only weeks later, George lost his wife of 23 years after a protracted battle with cancer.

Yet, as one door closed a window unexpectedly opened, setting the stage for a growing friendship and a second chance at happiness. George still remembers ringing Jean’s doorbell and asking if she would like to come golfing with him sometime. “It took a lot of nerve, believe me,” George confides. Jean smiles as she recalls the encounter. “He kept looking down shyly (as he spoke).” And while she didn’t golf very well, Jean gamely accepted his invitation, the first of many to come.

Later that same year, Jean was invited by her daughter to spend Christmas in Seattle. Knowing that Jean and George had become close, George was invited too. George was nervous about meeting the family, but all went well. So well, in fact, that the couple began discussing marriage. Not wanting the complications of planning a formal wedding, they came up with a spur-of-the-moment solution. Days before their return to Hilton Head, they were married in her daughter’s home with Jean’s son-in-law, a Presbyterian minister, presiding.

Understandably, their impromptu wedding was met with some disbelief. “We surprised everyone,” Jean remembers. However, it didn’t take long for family and friends to come to understand what they already knew—they were simply meant to be. Jean sums it up nicely, “We knew it was right.”  When they touched down in Hilton Head a few days later, George and Jean made a home together on the same street on which they met, moving to Bayshore only last year.

Jean, who will be turning 101 in September, proudly displays photographs of her family of three children, nine grandchildren and 17 great grandchildren. By the looks of it, George has been readily accepted into the clan. In many of the pictures, George sits front and center with the grand- and great-grandchildren. “Oh, they love him,” Jean laughs. Besides Jean’s family, George also has a niece and nephew who live nearby in Bluffton.

Looking at these two individuals, smartly dressed and looking far younger than their chronological years might suggest, it’s clear that married life has treated them well. George and Jean have enjoyed golfing, bicycling and plenty of traveling to visit all of Jean’s new great-grandchildren. In fact, Jean continued to ride her bike up until a year ago. They also volunteered delivering meals-on-wheels together for 14 years.

Life has slowed down since then, but the couple continues to stays active. George, who ran an architectural design and construction company in Hilton Head for many years, still rises at 6:00 am and spends hours drawing plans for houses before preparing breakfast in bed for his wife. They also attend church every Sunday and still enjoy an occasional drive around the island they love.

There’s no doubt that George and Jean have had a good life. “We never argue or fight,” Jean says. George agrees, adding, “We are the original Darby and Joanne,” invoking a term of endearment that his Scottish mother often used. So, what is their key to a successful life? Perhaps it all boils down to a commitment to each other and faith. “She is the key to all our happiness,” George says unreservedly. Jean beams back—the feeling clearly mutual—before adding, “and a prayer each day asking the Lord to watch out for us.”

Wishing you many more years together, Darby and Joanne.