A Heart Stopping Tale of Survival and Motivation 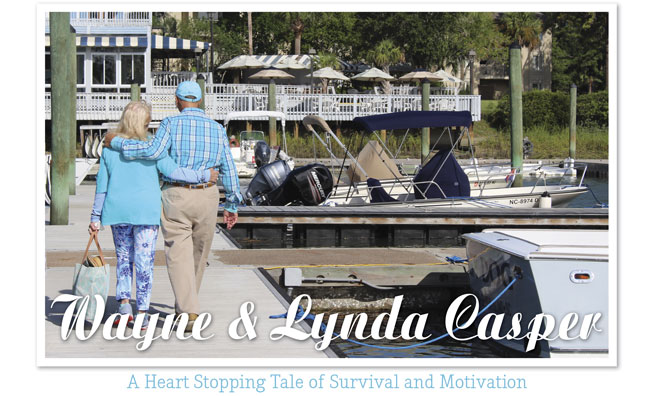 It was an especially beautiful evening in June. The weather was perfect, friends were gathered, and Wayne and Lynda Casper were holding hands on the upper deck of the Salty Dog tour boat ready to embark on a sunset cruise. They were shoulder-to-shoulder looking out at the water sharing how blessed they are to be living in such an incredible place. Wayne’s hands began to violently shake, then his whole body quaked in a seizure and he collapsed on the deck.

“Thank God that everybody who works on the boat knows CPR. And the captain immediately called 9-1-1,” Lynda said. “The EMTs arrived in minutes and worked on him for 25 minutes on that metal floor. The most amazing thing happened. All the people on the boat joined hands and prayed. Then the people in the restaurant came out to the railing and joined hands in prayer. It was like a movie, not real life,” she said. “It was super, super quiet, and the EMT finally stood up and gave a thumbs up and everyone yelled and clapped.” For Lynda, everything seemed to be happening in slow motion. She said that the ambulance ride seemed like the longest journey she’d ever made.

At the emergency room Wayne was stabilized, and three days later he was in the operating room at Hilton Head Regional Hospital for 10-1/2 hours. He had a quadruple bypass with blood vessels removed from his legs. His sternum had been crushed and splintered by the extensive CPR, so it was replaced with a titanium plate, and most of his ribs were broken so they were wired back together. Dr. John J. Keleman, a board certified cardiac and thoracic surgeon who joined the hospital last March, performed the surgeries.

Wayne spent the next 42 days hospitalized—18 days in the intensive care unit, then he was moved to critical care, then to rehab and finally home with home health aides scheduled. Lynda was not only counting days, she was listing every name of every person who provided care for her husband in order to thank them. “It’s such a small-town atmosphere here, and everyone rallied. Even the boat captain. He did take the boat tour out, then came to the hospital and sat with Wayne,” Lynda said.  “As a caregiver, you just don’t know how strong you are until you’re called upon to test it.”  Wayne added, “She did a tremendous job. She’s a lot smaller than me, but she pushed me around in a wheelchair, got me out of bed to use a walker and was with me all day. I wouldn’t have made it without her. I love her more now than when we married 54 years ago.” 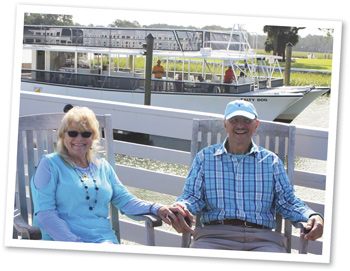 “I was cradled with care by 143 people,” Wayne said. “None of them ever knew me. The care was exceptional and these people were exceptional top to bottom. The whole thing was a wake-up call. I didn’t realize how intense intensive care is,” he said. “My sense of humor kept me going, but my motivation to live was Lynda. I couldn’t leave Lynda by herself.”

At 73 years young, Wayne still drove to Charleston to his job as a mechanical engineer. He never smoked, never drank, and he worked out at Powerhouse gym at least three times a week. He had been an athlete and was physically fit, but his only vice was fast food. He was unaware he had heart disease. In fact, the day of his cardiac arrest, he had worked hanging drywall on the 14-foot ceiling of his kitchen high on a ladder. That type of work and activity was normal for him.

In September, the Hilton Head Fire & Rescue team and staff from Hilton Head Regional Hospital organized a reunion for the Caspers aboard the Salty Dog tour boat with the captain and his crew. They were all present, including Dr. Keleman, to celebrate Wayne's victory over death and tell their versions of that life-changing day.

Keleman spoke to Wayne about the changes in his life and about re-purposing. He suggested that he become a spokesperson about heart health. To that end, Wayne and Lynda Casper will be the Featured Guests at the Southern Coast Heart Ball sponsored by the American Heart Association on Feb. 8 at the Westin Resort. Visit www.southerncoastheartball.org to purchase your tickets to support the American Heart Association and folks like Wayne and Lynda