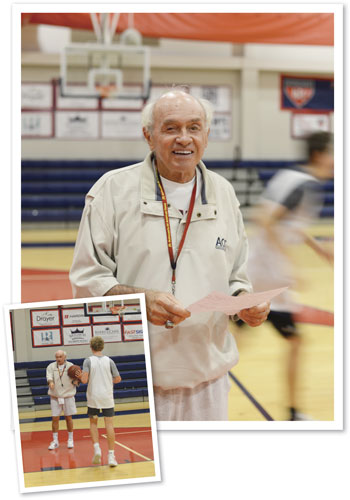 Basketball coach Jerry Faulkner is motivated by the satisfaction and pleasure he receives from helping others develop. He likens coaching to running a company. He teaches his high school players how to be emotionally prosperous, respectful, disciplined, and he sets the example. He respects authority and expects the same from his players. They are never allowed to disrespect an official, or for that matter, say anything to an official other than yes sir or yes m’am. If you ask his players—both past and present—it is they who are on the receiving end of Coach Faulkner’s motivating wisdom, which for many will last a lifetime.

Coach Faulkner’s demeanor is contagious. He teaches and motivates via tough love. He has one player who has played in the NBA and many more who have played in the European Leagues. In the 30 minutes we met, he motivated me to want to go back to coaching.

Coach Faulkner, hereafter referred to as “Coach,” started teaching and coaching basketball in 1967. He coached at Charlotte Latin High School in Charlotte, NC, for 23 years. He has coached 1,118 games: 839 wins, 279 losses—a 74 percent winning percentage. He has won state championships at three different schools over three decades and was inducted into the first ever Charlotte Latin Athletic Hall of Fame.

He wastes no time. He gave me a folder containing highlights of his career. He was proudest of a piece of Charlotte Latin stationery that listed the 97 names of each of his former senior graduates down the sides; this is his Charlotte Latin basketball family. He still gets frequent calls from players, even those he coached decades ago. Coach personally calls each player and manager on his current team every Thanksgiving and Christmas. He wishes them well and ends each conversation by telling each to thank their parents. He also sends out an alumni letter at least four times a year.

One mom told me a story about Coach and her son: “My son was going though a hard time last year, and Coach Faulkner called him more than 100 days in a row without fail. Coach Faulkner is one of the most influential people in my son’s life even though he hasn’t played for Coach for almost 10 years, Coach insisted on honesty, and asked him questions that held him accountable and motivated him to rethink his values and how they made a difference in what kind of man he was becoming. It changed him for the better, and I am forever grateful.”

Coach made it clear, “I don’t coach basketball, I coach PEOPLE. Basketball just happens to be the subject matter. If I’m just teaching players how to put a ball in a basket at one end of the court and how to prevent that at the other end, I am absolutely wasting their time.”

Coach is a staunch disciplinarian. He is soft spoken, but he like so many great coaches, he means what he says. Immediately, I thought of the great John Wooden and Dean Smith, who was Coach’s favorite mentor. Morgan Wooten, Roy Williams, Bobby Huggins and many more have crossed paths with Coach Faulkner, well known as a great motivator. He is on par with all of them.

Coach made a DVD in 2012 entitled “Managing the Coaching Issues You Face.” It is a teaching tool for aspiring coaches and a ‘must have’ for anyone who aspires to tackle this difficult profession—lots of hours in the gym and very little pay. The DVD talks about how to deal with parents, administrators, referees, problem athletes, the media, teachers and much more. He discusses how to cut players and how to choose one’s team. The topics in the DVD are the things he teaches in Nike clinics and at high school speaking events. He has dedicated much of his time to teaching others how to teach. He uses basketball as a vehicle to make positive changes in young men’s lives. He stresses “consistency of performance.” He doesn’t want his players to be good at one practice, he wants them to be good at every practice. Coach believes anyone can have one good business year, or be a good father for a while, “but greatness comes from doing it on a consistent basis.”

He has coached many prestigious all star games, including The Capital Classic in Washington, DC., McDonald’s All American Classic; and the USA vs Russia. He is a motivational speaker at numerous basketball camps and served as an assistant coach at Clemson University for four years. A corporate manager heard one of Coach’s presentations at a clinic. The talk was about people skills, leadership, motivation, recognizing issues before they become problems. The executive asked Coach to speak to his company in Atlanta. One of Coach’s favorite sayings is: “Listen to the whispers, and you won’t have to deal with the screams.”

“When I’m finished coaching, I hope people will not talk about the number of wins I had, but rather as in life, it is not the number of years you live, but the HOW,” Coach said.

But, he is not finished coaching yet. We still have this beloved motivator right here in Hilton Head. He is the boy’s basketball coach at Hilton Head Preparatory School. In his seven years there, his teams are 135-55. He told me it was 32 minutes to the gym in moderate traffic, then invited me to come and watch a practice adding, “Don’t be late!”