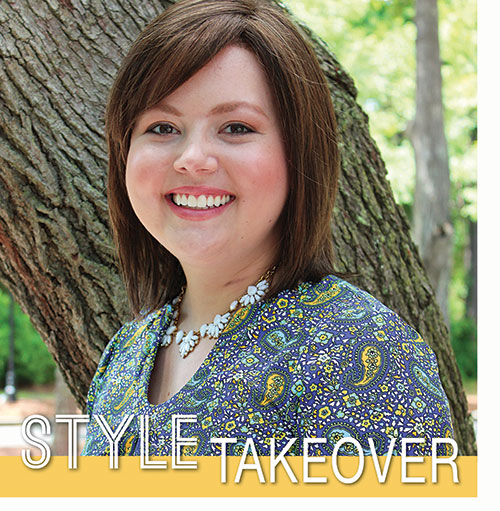 On Saturday, September 13, 2014, 22 year-old Maggie Creeden sat in Williams-Brice Stadium with thousands of fellow USC students and other Gamecock fans watching their team beat the Georgia Bulldogs. It was a great day and she was feelin’ fine. She wondered if her slight cough might be the start of bronchitis, and, after the game, she stopped by the doctor’s office.

The next morning, the phone rang. She was surprised her doctor was calling on a Sunday. The solemn voice asked, “Are you alone? Are you sitting down?” The doctor revealed that Maggie’s kidneys were functioning at 20 percent. She was told to go immediately to the emergency room, where a bed was waiting. A kidney biopsy indicated she had lymphoma. Maggie’s reaction was understandably, “No way, shut up. I feel totally OK.” Later tests indicated the cancer had spread to a lymph node in her neck and to the thymus in her chest.

Maggie is now in full remission and will start school again in the fall at USCB. By February, she felt strong enough to get a job at White House/Black Market at Tanger One Outlets in Bluffton. In early May, she became the store’s sales lead.

Maggie introduced herself, confident and unself-conscious, but aware she was the only bald young woman around and probably easy to identify. Her upbeat vitality belied the difficult months of treatment at MUSC, where she was the youngest patient at the cancer center. “Most of the people were great to me,” Maggie said. “There were a few negative old people who were real ‘Debbie Downers’ but I just moved my chair.”

Maggie spoke about the moment when she decided to shave her thinning brunette hair. “That was the defining moment, but I decided I had to do it. My hairdresser was the one who cried,” she laughed. “I ended up comforting her.”

Speaking of hair, Maggie’s first stop, several days before the makeover, was at Burke’s Pharmacy Wig Shop on Hilton Head Island, run by Debbie Price. Debbie wanted Maggie to come by and see if there was anything she liked or whether they would need to order something different. Maggie tried several different colors and styles, not convinced by any of them. Maggie spied one last possibility and when she tried it, Debbie and Maggie both knew it was the one. Maggie walked out that day, the happy owner of a new wig and a new look.

Later that same day, she went to Seasons, a women’s clothing boutique in Shelter Cover Harbour, to select an outfit for her makeover. Working with the sales staff, Maggie found a dress she loved. Apparently, the staff was also smitten with Maggie. Owner, Bonnie Kriscovich, decided to give the outfit to Maggie as a gift; just like Debbie and the Burke family gave Maggie the wig.

The actual day of the makeover we headed to Island Medical Spa on Hilton Head’s North end. Teresa Kitchings, licensed esthetician, met Maggie and led her back to a cool serene room. Over the next hour, Maggie received a skin analysis, hydrating facial, steam treatment and a massage. She emerged and exhaled, “I feel so rejuvenated and relaxed.” Just what the PINK team had hoped for.

Teresa acknowledged, “Maggie has flawless skin. It’s like baby skin.” The chemotherapy treatments sloughed off layers of epidermis, leaving it lovely, fragile and sun-sensitive. Teresa wielded her brushes and makeup palette like a master artist, deftly revealing her subject. She applied mineral powder foundation by Jane Iredell to create a natural glow. Maggie’s eyebrows and lashes were just beginning to come back after her treatments. Teresa feathered Maggie’s eyebrows with a light brown, intensifying her brown eyes and dramatically defining her face. Peach toned eye shadow brightened the lid area and contrasted with her dark eyes. A lightly tinted lip liner and gloss accented her mouth and orthodontist-perfect teeth. When Maggie saw herself in the mirror and smiled it was a revelation for us all. She was stunning.

We all went back to Burke’s Pharmacy where Maggie changed into her dress and Debbie tweaked the wig for the crowning “after pictures.” Throughout the process, everyone who met Maggie was uplifted on her buoyancy and spirit, instructed by her maturity and inspired by her inner beauty and the magnitude of her courage. It was more than heartwarming to see that beauty shining all the way through.

Our special thanks to:

Do you want a makeover? Email your picture and a short paragraph about yourself to
This email address is being protected from spambots. You need JavaScript enabled to view it.. 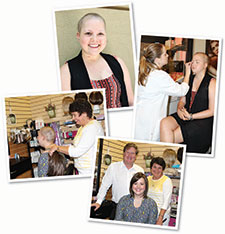