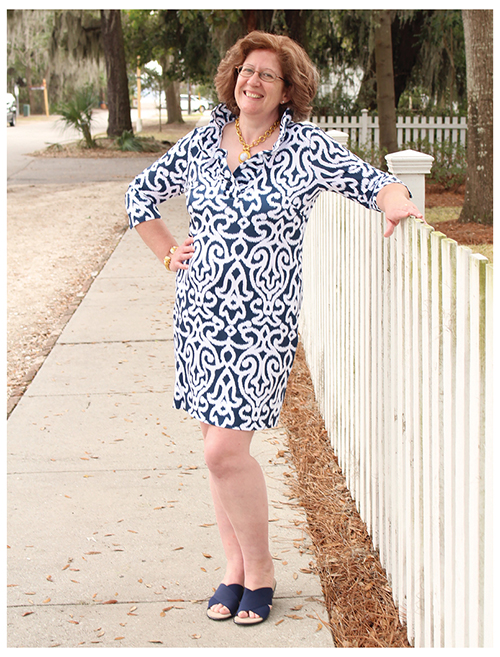 Meet Olive McMahon: Another brave, adventurous woman willing to undergo drastic changes, this month’s candidate is Olive McMahon, who spends her days chasing after three-year-olds at The Little Brown School in Port Royal. If that isn’t enough to give you grey hair, then I don’t know what is. Our sales rep, Dawn Harris, has a child in Olive’s class. Olive kept complimenting Dawn on her hair—and it is cute. It turns out Olive, probably like many of us (if we’re honest), in an attempt to save money, began coloring her hair with cheap box colors from the local __________ (we’ll keep it nameless). After years, Olive’s hair became so over processed and brittle it began breaking off. She sought the advice of professionals who told her she had two choices: 1. Undergo expensive treatments to restore her hair 2. Give that hair a break and let it grow out. Thank goodness Olive’s hair grows fast. After six months, hardly any color could be detected, leaving her hair grey and overall healthier, but not what she was looking for. Upon hearing her story, Dawn nominated Olive for a makeover, and who better to do it than Heritage Dental Spa and Salon, where Dawn gets her own hair cut and colored.

I met Olive at Heritage Dental Spa and Salon in Bluffton for a day of pampering, and I don’t mean babies. After a couple before pictures, I turned her over to cosmetologist, Dana Ferguson. Dana has been doing hair for 19 years and joined the Heritage team in May of last year. The first thing Dana did was ask Olive what her mornings are like. Olive has two daughters, ages 13 and 7. Her routine is that of a mom—showering, scrunching her hair, getting her girls ready and running kids to school on her way to work. There’s not a whole lot of time for primping and fixing, just wash and go, something Dana took into account as she came up with a plan for Olive’s hair.

STEP ONE: Dana began by cutting Olive’s hair, taking a lot of the length off and adding layers and texture. She decided on long bangs that swoop to the side to frame Olive’s face. Rather than using texturizing sheers, Dana does it all free-hand, giving her more control to add texture right where it is needed.

STEP TWO: Color, color and more color. One of the differences between using a box mix from the store, verses going to Heritage Salon, is that a box mix is one color, that’s it. You compare your before hair to the tiny postage stamp size picture on the box and hope it comes out something like the after picture.  A professional, on the other hand, looks at your hair, the texture, the thickness, the overall condition, and in this case, Dana mixed three colors together to achieve the right base color. She started out with a level 7, a light brown, and then added some red for warmth to bring out the color in Olive’s skin. She also made one mix for her roots, and another for the ends of Olive’s hair which were darker. Another difference is the amount of ammonia and chemicals found in the box verses what they use at Heritage. If you’ve ever resorted to the cheap box, then you know what I mean when I say, “that smell,” the one that stings your eyes, and heaven forbid some gets on your skin. At Heritage Dental Spa and Salon, they use a gentle product line by Tocco Magico. It does not possess a chemical smell, and it doesn’t burn your skin.

STEP THREE: Highlights. Dana added partial golden brown highlights to the top, crown and sides of Olive’s hair. This created contrast with the base color, giving her hair dimension and making it look more natural.

STEP FOUR: Trim a little more. Now, with much of the weight taken out of Olive’s hair and the texture being much smoother, her natural curl really began to show. Dana gave her a final trim to give her hair a more polished look.
STEP FIVE: Styling. Dana applied Heritage Dental Spa and Salon’s own brand of Lightweight Volume Gel and Shine Gel to help hold her style in place. She blew Olive’s hair dry while scrunching it and then used the curling iron to set a beachy wave.

STEP SIX: Fashion. Olive’s typical daily attire consists of T-shirts, leggings and tennis shoes. What else would you wear to keep up with three-year-olds? We headed over to Cocoon, on the promenade in Old Town Bluffton for some fashion advice from owner Ann Marie Fiore and consultant, Angelica Rosa. They helped Olive choose The Ruffneck Dress by Gretchen Scott, Julie Vos necklace and bracelet, and navy shoes by the Charleston Shoe Company.
STEP SEVEN: After photos. This is always my favorite part, seeing a person transformed from the outside in. Olive had a little more pep in her step and a little more smile with her new style, as we both vowed to never resort to the box mix again!

SPECIAL THANKS TO:
Heritage Dental Spa and Salon: Where Dana Ferguson can give you a look that is manageable with your individual lifestyle, and can take years off your appearance by finding the perfect color combinations for your hair. Located at 32 Malphrus Road, Suite 115, Bluffton. Book your appointment today: 843-837-4444. To learn more visit: www.heritagedentalspa.com.
Cocoon: Visit Ann Marie Fiore and Angelica Rosa at Cocoon where you will find a uniquely refined collection of items, and a sense of coastal elegance that permeates everything from clothing to accessories to the décor. Located at 6 Promenade Street, Bluffton. 843-815-3315