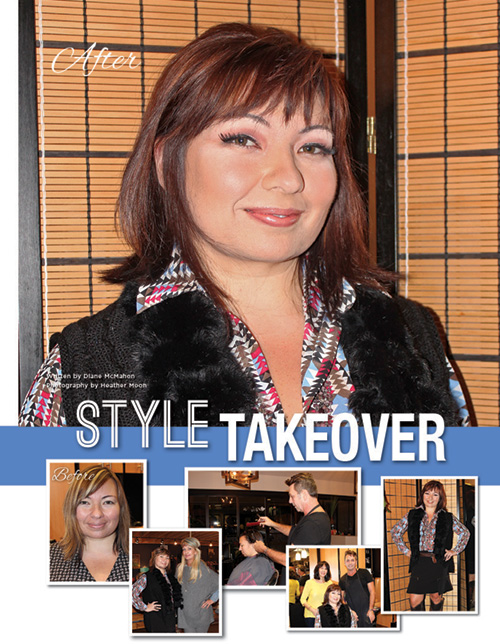 This month we wanted to “takeover” a woman who spends her life giving to others and let her be on the receiving end. Melissa Viets was the perfect candidate. Melissa, a certified nursing assistant and executive assistant at the Friends of Caroline Hospice of Beaufort, was suggested by her boss, Executive Director Lindsay Roberg. Everyone who knows Melissa agrees she deserved it.
Melissa told us she was shy and nervous and “really uncomfortable being the center of attention.”
Things were about to change.

First Stop: The Bleu Companies
We whisked Melissa off to The Bleu Companies on Hilton Head where owner Jerri Thompson welcomed Melissa into her ultra chic boutique that offers hip clothes and unique home furnishings, accessories and interior design consultation. Jerri took Melissa in hand; after pulling several bohemian items, Jerri switched gears and went in the back room for some spectacular finds. The result? A fabulously original ensemble with flared black pencil skirt and zipper trim, cowboy boots, a funky patterned shirt, rabbit-fur vest and sensational jewelry—all exclusive to Bleu. Jerri made the process fun and the end product made us all thrilled. Melissa was beginning to relax.

Next Stop: Tara’s of Hilton Head
Bev Martin, owner of Tara’s, generously agreed to a late in the day appointment to accommodate everyone’s schedule. We didn’t arrive till 5:00 pm. If there was any worry things might feel draggy and slow at the end of the day, no problem; things were hopping. We had a chance to visit with Melissa.

“I met my husband Frank when he was stationed as a marine in San Diego. We have two boys—Ashton and Jacob—and live in Sheldon near Bray’s Island. The boys really have a ‘Huck Finn’ life out there; life is pretty full, plus we have our three dogs—a great dane, English bull dog and a toy poodle—and a multiplying family of rabbits. I also really love my work. At the end of the day there’s not much time for pampering.”

Maybe most days. This wasn’t going to be one of them.  Bev Martin and Tony Crosby—the makeup artist—along with everyone at Tara’s turned the makeover into a party with wine and pizza served with loads of laughs. Even (supposedly) shy Melissa turned into a chatterbox!

Bev and Tony consulted on Melissa’s hair color and decided to darken and warm her base color to add dimension. They saved her highlights, but added a crimson glaze to carry her summer look into fall. Even wet, the new color was striking. Bev maintained Melissa’s basic cut, but shaped and layered it to increase volume. When Bev turned Melissa around in her chair, after blow-drying her hair, everyone cheered. Outside, the evening got darker; inside the mood got lighter!

Tony wheeled his massive makeup trolley into place.  He started with a primer to even out skin tone and prepare the skin for the cream/powder base. Melissa is young so most of the makeup application was about contouring and accentuating her features.

Tony maintained the fall theme by using a palette of neutral highlights and warm browns and reds. He highlighted her lid above the lash line and used a darker shadow to actually create a crease in her mid-lid which opened up her eyes. He darkened her eyebrows. When he added the super-glam eyelashes that zoomed her into the WOW-zone, Melissa was even more wide-eyed and so were we!  Melissa’s lips—already lovely—were just waiting for that extra glossy sparkle.

She went into the back room to put on her new Bleu outfit.  She walked back out to hoots and wolf whistles.  Bev sat her back down in the chair for a few final touches to her hair and makeup before the after pictures.  Melissa looked radiant.  We all teased her about going home to Frank looking like a movie star.

Several days later we received this note from Melissa:
“I have always lacked confidence in myself inside and out and after spending Tuesday with [Pink] and with Bev and Tony at Tara’s I can tell you that I no longer struggle like I did.  I’m not saying I’m 100% cured but my confidence level is much greater now.  Thank you for making me feel beautiful.”
A day at work doesn’t ever get better than that.

To all the people who made this possible­­—our deepest gratitude and thanks.

Special Thanks To:
The Bleu Companies: Jerri Thomas thank you for your incredible taste and generous spirit. You rock.  843-341-2538. 807 William Hilton Pkwy., HHI.
Tara’s of Hilton Head:  Bev Martin and Tony Cosby you went above and beyond. Thanks for the greatest time. For appointments: 843-842-4911. 55 New Orleans Road, HHI.
Friends of Caroline Hospice: Lindsay Roberg and staff, thank you for sharing Melissa.  She is the most wonderful woman and devoted to all of you. 843-525-6257. 1110 13th St., Port Royal.
Want to nominate your friend for a makeover? Email This email address is being protected from spambots. You need JavaScript enabled to view it. a picture.