HomeMonthly ReadsParentingTen Biggest Mistakes Parents Make (and how to stop making them!) 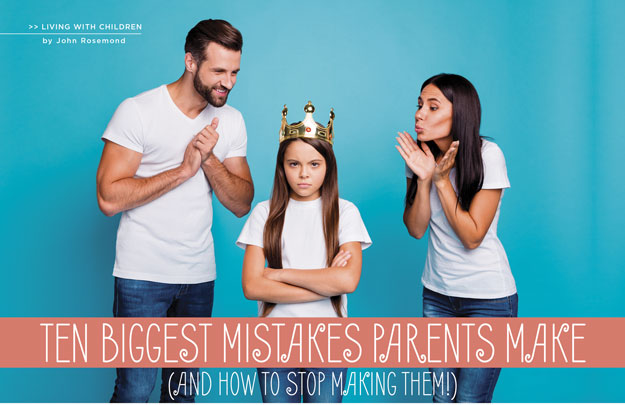 One of the “secrets” to a happy, healthy emotional life is to identify one’s bad, nonproductive habits and replace them with habits—slowly built—that are functional. That same principle is of the essence when it comes to a parenting life that is satisfying.

Most parents who want to do a good job but feel frustrated in the attempt are making a finite number of mistakes – ten, to be exact. If a parent who is making these common mistakes eliminates and replaces them with behavior that works, both their’s and their children’s frustration will practically dissipate.

Arguably the Number One Biggest Parenting Mistake is explaining oneself to one’s kids, giving them reasons and explanations for parental decisions as if a parental decision isn’t valid and can’t be put into practice unless the child in question approves. Explanations also assume that parent and child are peers, and that the parent’s authority in any given situation is open to negotiation. Of course, it goes without saying that the “negotiations” in question aren’t constructive dialogues; they’re debates that often devolve into yelling, threatening, and guilt. Can you say, “Because I said so”? Those much maligned four words simply affirm that the parent’s authority is authentic, and let me assure you that a parent who would give up his seat in a lifeboat to save his child possesses unassailable authority over said child.

Number Two is striving for blissful relationship with one’s child. A parent’s job is to provide leadership. When relationship is the priority, effective leadership is impossible. Why? Because leaders must be willing to make unpopular decisions. Can you say, “Well, Billy, I am sorry to have to tell you that I really don’t care what you think, or how you feel about any decision I make, or me for that matter, and the sooner you accept that, the better for you.” Relationship is the result of proper leadership. Put it first and you will be forever gnashing your teeth over disciplinary matters.

Number Three is giving children lots of choices. Again, mental health professionals don’t know what they are doing as regards children. It’s quite simple: children do not know what they truly need; they only know what they want; therefore, their choices are generally bad. They don’t need practice making decisions; they need parents who make good decisions for them. Eventually, if said parents stay the course, their kids will figure it out and thank them for it.

Number Four, implied in Numbers One, Two, and Three, is believing that people with capital letters after their names know what they’re talking about. A fellow asked me, “Do you think psychologists and people in the mental health community in general have said anything worthwhile?” No, I don’t. That’s right, nothing, zero, nada, zilch. Their foundational premises concerning children and parental responsibilities are a mess. When one’s premises are faulty, one’s recommendations will be faulty as well. It’s certainly an ironic thing for me to say, but if parents—mothers, especially—would boycott all parenting books, children would be much better off. Well, not ALL parenting books.

For number five, Let’s begin with what is probably the single most absurd bit of advice mental health and child development specialists have ever snatched out of thin air: to wit, when an adult addresses a young child, the adult should “get down to the child’s level.” Supposedly, talking to a child from a fully upright position is intimidating and sure to bring on a psychological apocalypse of one sort or another. Where do these people come up with this ridiculous stuff, anyway?

The position in question—I call it the “sycophant squat”—is clearly subservient and communicates to a child that you are pleading. In fact, since vocal quality tends to match body language, there is great likelihood that you will indeed sound as if you’re begging, as in, “It would really help Mommy out, Little Bubba, if you would pick up these toys and put them away. Will you do that for Mommy, okay?”

As I often say, the key to getting a child to do as you tell him to do is not proper consequences (albeit consequences can play an important role at times), but rather a proper presentation. Children obey people who look and act confident in their authority; they do not obey sycophants. And by the way, the research is as clear as can be that the more obedient a child, the happier the child. Parents have a responsibility to ensure obedience on the part of their kids and the sycophant squat is not consistent with that responsibility.

While I’m on the subject of communicating authority properly, I must mention problem number six—the currently ubiquitous habit of parents ending instructions with “okay?” When that is the case, the instruction is no longer an instruction; rather, it is a suggestion and a suggestion that sounds like whining to boot. Today’s parents are not having more problems with child obedience than their great-grandparents even thought possible because the oppositional-defiant mutation entered the gene pool 40 years ago. They are having said problems because they are–not all of them, of course, but entirely too many—acting like wimps in front of their kids. In many parent-child situations, there is no adult in the room!

Yet another common contemporary parenting mistake is using consequences (when they are needed) that mean nothing. Number seven can be illustrated by a mother who recently told me her 5-year-old daughter hauled off and hit her in a fit of pique. What did mom do? She put the little narcissist in time-out for five minutes! Wow!

“Are you ready?” I asked. “For what?” “For her to hit you again. You’ve taught her that if she hits you, you will do essentially nothing.”

She asked what I recommended if it happens again. I told her to confine her daughter to her very nice and comfortable room for a month during which she can enjoy parole to eat with the family, do chores, go to church and school, and accompany the family outside the home. She also goes to bed immediately after supper, seven days a week. No birthday parties, sleepovers, or sports. The operative principle: If a consequence does not establish a permanent memory, it’s been a waste of time and effort.

“A month! You’ve got to be kidding, John! She’s only 5!” protests a reader or ten. Right. And she has a very nice room. In fact, confined to her room, said five-year-old will have a better month than at least half of the world’s children. One thing is certain: At age 70, she will remember being in her room for a month when she was 5. She will also remember that she never hit her mother again.

Number Eight (these are in no particular order, mind you) is putting your marriage on a shelf in a seldom-visited closet and “parenting.” This is also known as acting like you took this vow on your wedding day: “I take you to be my husband/wife until children do us part.” It may sound paradoxical, but husband and wife do a much better job of raising kids than do dad and mom. In a family, children should come no less than third—as in, marriage, parents, children.

The ninth Biggest Mistake Parents Make is using recreational time (e.g. vacations) to do what children want to do. Consider that visiting a foreign country may cost less for a family of four than going to Dizzy World and bulldozing through crowds of people, many of whom are rudely pushing two- and three-wide strollers. Cost includes the stress of such insane activities to otherwise sane adults. There are plenty of peaceful places in the North American hemisphere that are both enjoyable and educational. Name one ride at Dizzy World that is as stunning as the Grand Canyon (where children can learn basic geology) or Mount Rushmore (where children can learn American history). You can’t! For lasting learning, try Colonial Williamsburg, Virginia, (until they were on-site, our kids were convinced they would hate it). Ask yourself: Who earned the upcoming vacation? YOU did! Need I say more?

And the tenth Biggest Mistake—Ta Da!—is causing children to develop Vitamin N deficiency. This nutrient—the most powerful two-letter word in the English language—is essential to the development of emotional resilience, which is widely recognized as key to good mental health. A lack of Vitamin N accounts for the proliferation of “safe spaces” on college campuses where run spoiled rotten snowflakes who become “triggered” when confronted with a world that does not recognize their specialness. Vitamin N builds strong character, which builds strong communities.

And NO, if you haven’t figured out what I mean by Vitamin N, there’s NO way I’m going to tell you. Get it?

How does one stop making the Ten Biggest Parenting Mistakes?
One simply stops making them.