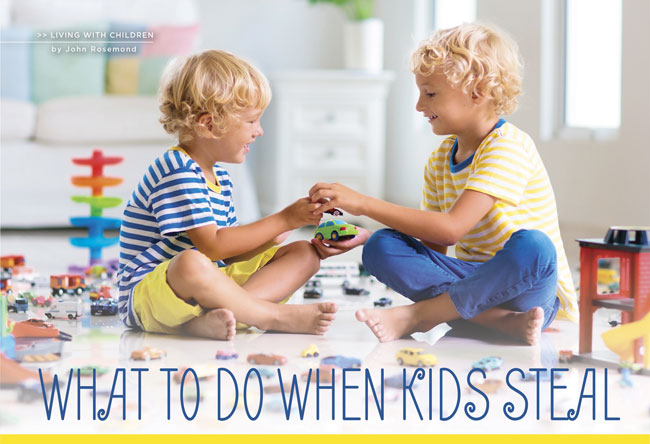 Q: Our 7-year-old son recently stole two small model cars from a playmate while he was at the playmate’s house. Apparently, he wanted to trade one of his toys for the two cars, but the playmate refused, so he stole them. When we found them, he claimed his friend had given them to him. We absolutely know that’s not true, but it’s been over a week and our son refuses to admit to the theft. He’s changed his story, then changed it back, so we know he’s lying, but still he refuses to budge. Nothing like this has ever happened before and we’re at a loss. We called an acquaintance of ours who’s also a therapist. She said that children who steal are often compensating for some insecurity and that punishing him could make matters worse. We have no idea what insecurity our son is dealing with or what to do about the theft and his lies.

A: With all due respect for the therapist you consulted, I know of no research that connects childhood stealing with insecurity. Her suggestion is purely speculative, as are almost all psychological theories of human behavior. It amounts to what I call a “psychological boogeyman”—an unprovable hypothesis that does nothing but cause parents to think their child’s misbehavior is the result of some ongoing parenting sin.

The fact is, children are notorious for doing odd, inexplicable things. A random misbehavior is generally the result of a sudden impulse as opposed to some psycho-emotional deficiency. The most brilliantly insightful explanation I’ve ever come up with for these occasional anti-social impulses is “children are impulsive.” Kidding aside, asking a child to explain a lie, theft, or any other sneaky behavior is almost always unproductive. The most likely answer is “I don’t know,” which is usually the truth.

This episode is probably nothing more than a “one-off.” The problem is that a drama has now developed around the incident. Such dramas increase the possibility that the misbehavior in question will happen again.

With that in mind, my first recommendation to you is that you stop talking to your son about this. Stop asking him to explain himself. Stop pressuring him to admit to what you already know is true. Stop holding mini-seminars on interpersonal ethics.

Simply tell your son that you know he stole the toys from his friend (at this point, completely ignore any denials) and that until he admits to the theft and apologizes to his friend, he is confined to his room, which you must strip beforehand of any “entertainment value.” He can come out of his room to attend school, church, family meals, do chores, and accompany one or both of you when you leave the home. During his confinement, put him to bed, lights out, immediately after dinner. The purpose is to establish a permanent memory, one that will cause him to think at least twice the next time he wants something that belongs to someone else.

If my experience serves me well, he will spill the beans within a week. If he’s more than typically stubborn, it might be two. Regardless, this experience will give him a new appreciation for the property rights of others. (And contrary to what a therapist might tell you, confining a child this age to a nice but boring room will not leave psychological scars. During the time your son is so confined, he will still lead a better life than at least fifty percent of the world’s children.)

When he admits and apologizes, put the matter to rest. Let him out of his room, restore it to its former glory, and move on.