Grandma Takes You to the Movies

Grandma Takes You to the Movies 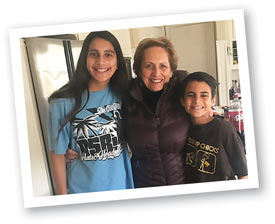 If you are looking for films for young adults ages 10 to 15, here my top three picks. My Atlanta grandchildren, Apolonia, age 12, and Konstantin, age 10, gave two thumbs up for all three.

Black Panther, starring Chadwick Boseman as T’Challa, the African king who fights evildoers in the guise of a wildcat, is unusually grounded for a Marvel superhero. Set in Wakanda, supposedly Africa’s poorest country, the poverty turns out to be surface deep. Under a lush cover of trees is a city both ancient and futuristic, where sonic-powered railways snake among great stone towers, the works fueled by the metal Vibranium—best known as the substance of Captain America’s shield. For thousands of years, the Wakandans have cherished and protected their isolation, along with their Vibranium. But their worldview is about to be brutally tested. T’Challa’s do-gooder, on-and-off girlfriend, Nakia (Lupita Nyong’o), is bent on crossing the border to help other imperiled African countries. Far more dangerous, though, is the aptly named militant Erik Killmonger (Michael B. Jordan), who looks to Vibranium to power a full-scale international race war and sell Vibranium to other evildoers.

Casting of Chadwick Boseman was an excellent choice, as well. He is gentle and compassionate, yet strong…a perfect king.

In A Wrinkle in Time, Meg Murry’s father, an eminent physicist, has been missing for two years. One night, a strange old woman, Mrs. Whatsit, appears, “blown off course,” while she, along with Mrs. Who and Mrs. Which, were tessering, or taking a shortcut through time and space. They take Meg, her little brother Charles Wallace, and their new friend Calvin, to rescue Dr. Murry, who is a prisoner on a planet ruled by IT, a giant pulsating brain that controls the minds of everyone on the planet. When Meg finds her father, she discovers that he is not the invincible protector she thought he was. She must not only come to terms with this realization, but also find a way to rescue them both.

Besides being an exciting story, its messages of individuality, nonconformity, friendship and courage is inspirational. Perfect for kids who’ve ever felt different, or lonely, or who have wrestled with loss. This film celebrates the power of individuality, bravery and love.

This film is hopeful and brimming with imagination—a timely rally cry for everyone who (to paraphrase T’Challa) believes in building bridges, not barriers.

The only criticism is that Oprah, who is larger than life in real life, is cast as the giant Mrs. Which. Not necessary Oprah.

In a dystopian near-future Japan, a dog flu virus spreads throughout the canine population. The authoritarian new mayor of Megasaki City, Kobayashi, signs a decree banishing all dogs to Trash Island, despite a scientist named Professor Watanabe insisting he is close to finding a cure. The first dog to be banished is Spots, who belonged to Atari Kobayashi, the orphaned nephew and ward of the mayor.

Six months later, Atari runs away from home, steals a plane and flies to Trash Island to find Spots. After a crash landing, five dogs rescue him: Rex, King, Duke, Boss and Chief. They decide to help Atari locate Spots.

True confession: I am a huge Wes Anderson fan and I loved this animated film. It is clever, beautifully and artistically animated. The voice casting was amazing and fun to listen to someone like Bryan Cranston as Chief the stray dog. Kids and adults will love it.

Donne Paine, film enthusiast, once lived around the corner from the Orson Wells Theater in Cambridge, Massachusetts where her strong interest in films, especially independent ones, began. Supporter of the arts­—especially films—she travels to local and national film festivals including Sundance, Toronto and Tribeca. There is nothing like seeing a film on the big screen. She encourages film goers to support Hilton Head local theaters—Coligny, Park Plaza and Northridge theaters. To support her habit of frequent movie going Donne is an executive recruiter and staff development consultant. Email This email address is being protected from spambots. You need JavaScript enabled to view it.