So why watch older films now? In part, because these films demand it. Because the performances and quality of filmmaking are so terrific they are worth watching again. Another reason why classic films are worth watching today is this: What have you seen lately that you can remember one year after you’ve seen, or even one day in some instances?

Perhaps the more people we can get to watch classic films, the better things may become all around…spread the word.

Match the Classic Movie with the Famous Quote:
There are certain films considered classics that have memorable quotes often repeated in conversations, trivia games and commercials. After interviewing moviegoers of various generations on their top classic picks, the Reel Corner’s Top 20 Classic Film Choices were chosen.

(Many thanks to Lynn, Diane, Gabe, Melissa, Sanjay, Judy, Maria, Kaitlin, Sean, James, Christopher, Seth and Sue for their input.) Match the movies below with their quote. Don’t forget to check your answers at the bottom of the article. 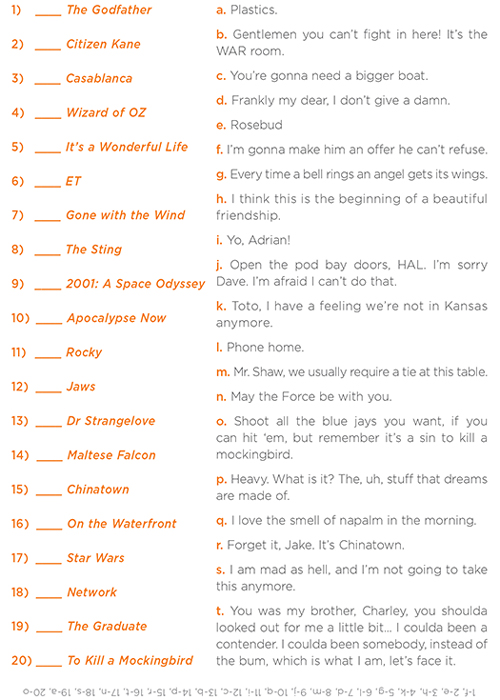 Donne Paine, film enthusiast, once lived around the corner from the Orson Wells Theater in Cambridge, Massachusetts where her strong interest in films, especially independent ones, began. Supporter of the arts­—especially films—she travels to local and national film festivals including Sundance, Toronto and Tribeca. There is nothing like seeing a film on the big screen. She encourages film goers to support Hilton Head local theaters—Coligny, Park Plaza and Northridge theaters. To support her habit of frequent movie going Donne is an executive recruiter and staff development consultant. Email This email address is being protected from spambots. You need JavaScript enabled to view it.