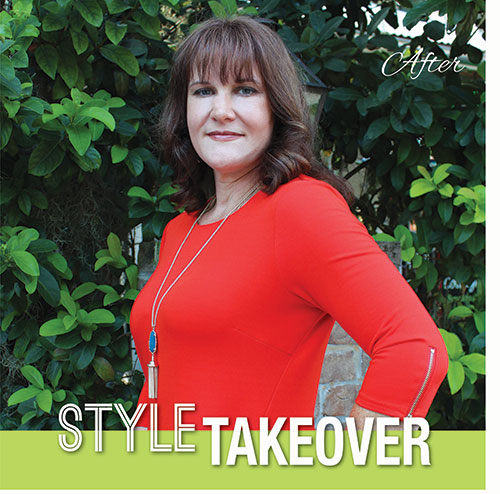 The Tara Stimpson you see on this page radically transformed herself before stepping into A Beautiful U Salon and Gigi’s Boutique for this month’s style takeover. Since the fall of 2013, Tara has lost 90 pounds. Through a self-designed program, she has become a health and fitness success.  Pink wanted to celebrate her story.

Tara Stimpson woke up on November 1, 2013, and decided this was the day she had to make a change. She was a young, single mother of one daughter, and she was afraid she was killing herself. She couldn’t manage any difficult activity without struggling to catch her breath. She couldn’t lie on her side. She had chest pains and knew the risks—she’d had heart surgery when she was 2½-years-old—but told no one. Tara had always been athletic and slender, but after moving from South Florida to Bluffton in 2007, she ballooned to 250 pounds. She was wearing size 22 clothes.

Tara was emotional as she recalled that period. “I finally decided to do what I needed to do. With the support of my mother and friends, I started by cutting out all soda and fast food. By February 2014, I had lost 50 pounds. I started exercising three days a week at home,” she said. Tara ate only 1200 calories a day to jump-start her weight loss and admits it was hard in the beginning. It got easier.  She maintained a healthy diet and made sure fruits, vegetables and protein where her major food groups. She now eats breakfast, snack, lunch, snack, dinner and possibly a snack in the evening and said this helps to keep her metabolism going.  From Monday through Saturday she does cardio and strength training for one to three hours every day. On workdays she gets up at 4:00 a.m. and uses her treadmill, elliptical and exercise videos. On Sundays she does something less intense, like yoga.

Tara specifically emphasized that her decision to change was more than a diet and exercise routine; it was a complete life change she intends to maintain. “I want people to realize that you will have days that you fall off or cheat days; all you can do is make tomorrow better and get right back to your new lifestyle.”

Pink wanted Tara’s new lifestyle to get the recognition, applause and super sexy style takeover it deserved. Enter Lilia Westbrook, stylist and makeup artist at A Beautiful U Salon, owned by Jeri Iszo. Lilia took one look at Tara’s beautiful blue-green eyes and decided to turn up the heat on her blah-brown hair. She gave her a darker, more vibrant base color and added hot red and copper highlights.

Aware of Tara’s active lifestyle—in addition to her at-home routine she plays tennis, bikes, plays racquetball and swims—Lilia decided to give her a low-maintenance cut and left Tara’s hair long enough to pull back or up off her face.  Lilia spent time layering Tara’s thick hair to give it lightness and swing. As Lilia blow-dried Tara’s hair, we were all amazed how its sparkle and shine was reflected in Tara’s eyes. Clients in the salon came by to marvel. Numerous people told Tara her color was great and made her eyes amazing. And that was before makeup.

Next Lilia opened her massive silver makeup box. She used a cream concealer to even out Tara’s skin tones and remove the redness before blending in the foundation. She used a contouring powder under Tara’s cheekbone and jawline to enhance her bone structure. While darkening Tara’s eyebrows, Lilia said Tara should stay away from blue and silver eye shadows and stick to browns and coppers to enhance the green in her eyes. Lilia used a light neutral shadow under her brow line and the corners of her eyes to open them up; with a copper shadow along her lash line and black liner and mascara. The result was a pair of eyes that stopped people in their tracks. Lilia’s final touch was a nude lip gloss and darker lip liner.  When Tara turned around in her chair, we all literally oohed and aahed. Tara was truly striking; her beaming smile told us she didn’t disagree.

We then headed for Gigi’s Boutique on Calhoun Street in Bluffton, owned by sisters Anna Pepper Hewett and Emily Burden.  Katie McSavaney was on hand to pick and pull a number of outfit options; we all hand-pumped “yes!” when Tara emerged in the fiery, red-orange, zipper dress by Jade—appropriately labeled “Flame”—and the suede fringe heel in taupe by Very Volatile. The gorgeous Kendra Scott “Everly” necklace, with its teal agate stone, was complemented by: a Poppy Ring in navy; a variety of gold and bead bracelets by E. Newton and B.B. Lila; and gold stick earrings by LV Designs.

After pictures, we all stopped a moment to celebrate Tara’s huge accomplishment and relish the happy moment. Everyone loves a reward. Tara truly deserved it!

A Beautiful U Salon: Owner Jeri Iszo and stylist Lilia Westbrook; Gigi’s Boutique and Katie McSavaney; and Tara’s boss and co-workers in the Growth Management Department of the Town of Bluffton who encouraged and made it possible for Tara to participate.

Book Your Own Style Takeover: 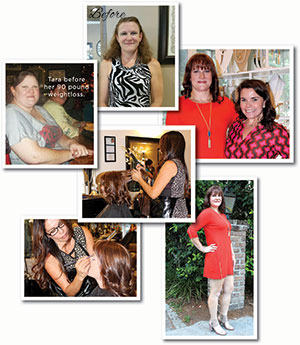