HomeMonthly ReadsParentingParenting September 2022: Hey Mom and Dad! Just Say No to Being Your Child’s Homework “Buddy” 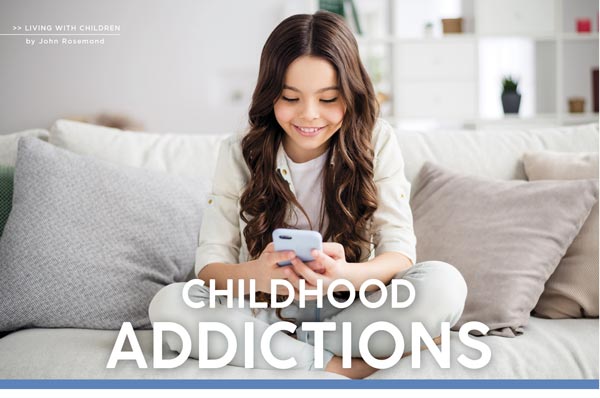 Concerning my prior use of the word “addiction” in association with smart phones
and children (including teens), some people think I am speaking figuratively.
To set the record straight: No, I am speaking quite literally.

When the addiction in question is to a substance, as in an opiate, there is both a psychological and physical component. During withdrawal from an addictive substance, both components come into play. The individual’s thoughts and emotions are in disarray and the person suffers physiologically, as well. When most people think in terms of an addiction, that is their mental picture.

But addictions can develop in response to things other than chemical substances—smart phones, video gaming, certain forms of enabling, and so on. When withdrawal from a non-chemical addiction is forced, the addict’s psychology is disrupted, but physiology generally does not come into play. In these cases, the addict may become highly anxious, depressed, or aggressive. It cannot be overstressed: The fact that withdrawal does not include a physiological manifestation does not mean the person was not literally addicted.

My thoughts along that line were prompted by a mother recently telling me that when she confiscated her teenage daughter’s smart phone, the girl “went insane.” She attacked her mother—hitting, scratching, knocking her to the ground, and drawing blood in the process. She stopped when police arrived. The mother’s words: “I thought she was trying to kill me.” Mom is, by my estimation, a fairly level-headed individual, by the way.

I have heard several dozen similar stories involving children as young as 10. In addition, I’ve heard of children attempting suicide, going berserk and destroying property, both in their rooms and the general living space of the family (breaking windows, ripping televisions off the wall, smashing plates and glasses, and so on), and disappearing for days on end—all in response to having their smart phones confiscated, and all symptomatic of literal addiction.

Smart phone addiction is not limited to children and teens. The other day, my wife and I were seated in a restaurant in Charleston, South Carolina, when a party of three women looking to be in their late twenties or early thirties were seated nearby. Immediately, two of the women took out their smart phones and began scrolling, tapping, and staring, while the third woman sat by, patiently waiting for her friends to return from outer space, which took about five minutes. Smart phones are not only addictive, they have also given rise to a new form of disrespect.

To be clear, I am talking about so-called “smart” phones that access the Internet. I have no problem with a teen having a phone that does nothing but make and receive calls and texts, but a parent has yet to give me a good reason for providing a child or teen with a smart phone, unless, that is, “I don’t want him to be the only kid in his peer group who doesn’t have one” is a good reason. It’s not, by the way. It’s the dumbest of all the dumb reasons.

Many of these parents tell me their kids don’t treat them with respect. Right! People who are being enabled do not ever respect the people who enable them. Why should they?