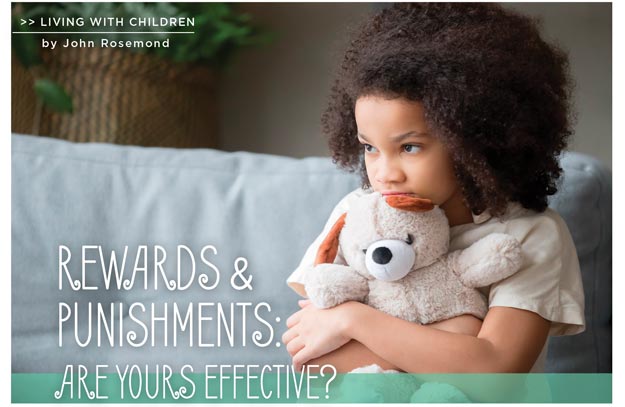 June 2020 Issue
Rewards & Punishments: Are Yours Effective?
by John Rosemond

What my graduate school professors conveniently “forgot” to tell me: Skinner failed to prove his hypothesis, and no researcher has ever succeeded where Skinner did not. Some have claimed success, but all they’ve succeeded at proving, really, is the fact that human beings are economists by nature. From a very early age, humans weight benefits versus costs and make logical decisions, if not always rational ones.

Researchers have found that when the subject is human, rewards and punishments have paradoxical effects at times. Rewards can lessen desired behavior and punishment can increase undesired behavior. Significant numbers of parents have discovered the same paradox, albeit most of them don’t understand what it is they’re seeing.

Put a 15-month-old child in two minutes of time out every time he goes after one of his mother’s set of limited-edition porcelain figurines and watch as his determination to obtain the figurines increases. Praise and continue to praise a 4-year-old child for making an attempt to draw a horse and watch him stop drawing horses. In both cases, economics is at work.

In the case of the toddler, two minutes in a chair doesn’t begin to outweigh the thrill of the chase. The more time outs, the more of a challenge those figurines become. The 4-year-old stops drawing horses because he figures out, intuitively, that any old horse is good enough to send his mother into clapping spasms, high-fives, and “woo-woos!” That wears thin quickly.

To work, punishments must outweigh a child’s determination to win, to prove that no one can tell him what to do. To win over the little rebel/economist, the cost of misbehaving must be significantly greater than the benefit, and believe me when I say that rebellion is its own benefit. It scratches a persistent itch. The parental goal should be to punish infrequently, but when punishment is necessary, to do so in ways that establish permanent memories. Time out is the least memorable of all punishments, by the way. It’s merely annoying.

To be motivating, rewards must be dispensed conservatively. The more “everyday” they are, the less meaningful they become. The value of a reward is inverse to its frequency. The scarcity of praise forces a child to self-reward, which characterizes all high achievers.

As I will forever maintain, childrearing is not complicated; it’s almost completely a matter of commonsense. Unfortunately, for going on 50 years now, American parents have been listening to professional “parenting” types who have made it seem complicated and anything but commonsensical.