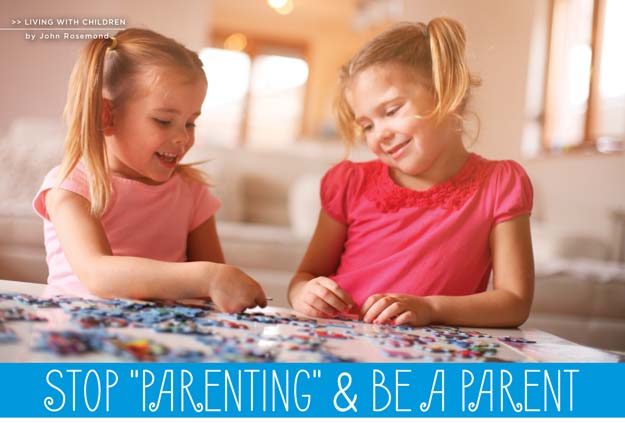 May 2020 Issue
Stop "Parenting" & Be a Parent
by John Rosemond

One website is titled “How to Cope with Kids During Coronavirus.” Another, featuring a staged photo of an obviously frazzled mom with a toddler on her lap, tells the reader that “Parents are losing their minds having kids at home during coronavirus!” There’s yet another, advising on “How to Keep Kids Entertained During the Crisis.” On and on it goes, website after website counseling parents on how to deal with being confined at home with one’s kids.

The early Twenty-First Century may be remembered as the “Age of the Personal Soap Opera.” A person makes a soap opera out of a life situation, claims victimhood, garners sympathy, manufactures more soap opera, garners more sympathy, and so on. Soap opera begets soap opera. Forty-plus years of counseling experience has taught me that once a person becomes caught in the soap opera loop, it is harder than hard to get out.

For thousands of years, it was normal for children to be at home. It never occurred to parents that they might need “support” or advice to deal with that circumstance. Everyone was in the same sturdy boat. Furthermore, the boat had two paddles and was helmed by one or two adults who obviously knew how and in what direction to row. No one went running pell-mell down the road screaming that their kids had pushed them over the edge.

And then, along came television, day care, and something called “parenting,” one aspect of which is the understanding that good parents put children at the center of their attention and see to it that they are always occupied (meaningfully so), even entertained.

Growing up, I was blessedly deprived of a mother who “parented.” My non-parenting mother, who was a single parent during most of my first seven years, did not put me at the center of her attention and hardly felt it was her job to keep me occupied. That responsibility fell squarely on my little shoulders.

And just like that, I found something to do, knowing that Mom’s solution would not be at all to my liking, as in “You’re going to wash the kitchen floor and if you’re still bored, I have plenty of other things with which to un-bore you.”

Television has made both kids and parents lazy. Journalist Marie Winn termed it the “plug-in drug.” Her book of the same name was instrumental to my belated understanding of television’s devastating effect on the normal progression of development in a young child; specifically, how it throws a wet blanket on a child’s curiosity and motivation.

Television—and now its demonic offspring, social media—also promotes the notion that a life without drama is a life without meaning. One of the dramas du jour is “Having my kids at home is shredding my sanity into itsy-bitsy pieces!”

The solution, stop parenting. Turn off the television. It’s full of mostly junk programming and bad news anyway. Take your kids to a bookstore or a library. Buy them games they can play with one another. Teach them to play something non-electronic. Get them involved in hobbies. And don’t forget to assign each of them a routine of those old-fashioned things known as chores.