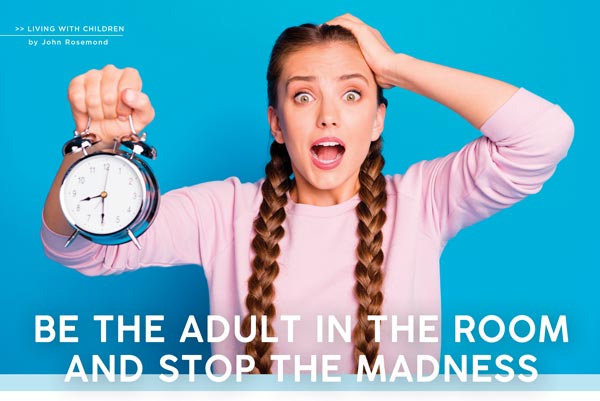 
I often find myself telling parents that they need to stop
doing something that is counterproductive and, in most cases,
contributing significantly to whatever parenting problem is bedeviling them.

“How do I stop?” is the typical response, which brings to mind “The Bob Newhart Show” which ran on CBS from 1972 to 1978. Newhart, a truly gifted comic (i.e., one who does not need to resort to vulgarity to get laughs), played Dr. Robert Hartley, a Chicago psychologist who was known for his unusual therapeutic techniques, one of which consisted of two simple words.
After listening to a client describe a mental problem, such as an obsessive fear of being buried alive in a box (my personal favorite), Dr. Hartley would lean forward and yell, “Stop it!” (Readers interested in watching a brilliant demonstration of authentic comedy can access re-runs of TBNS online.)

Hartley being one of my professional role models, my answer to “How do I stop?” is a variation on his trademark therapeutic technique. Granted, I say more than “Stop it!” and I certainly don’t yell at a client, but the message is pretty much the same: “I don’t know how to answer that question, but I do know that you need to be the adult in the room, and being said adult requires that you stop doing what you’ve just described.”

A personal example will hopefully suffice: The high school attended by my daughter, Amy, exempted a junior or senior from the final exam in any subject in which she was making an A and had no unexcused absences or tardies. Amy had no problem with the former requirement but was a perennial over-sleeper. On any given school morning, her mother and I began trying to get her out of bed an hour before she needed to be out the front door.

These attempts began gently, relatively speaking, but quickly devolved into harangues of the following sort: “Amy! It’s seven-thirty! If you don’t want to take the final in your first and maybe your first and second classes, you have to get out of bed! Now! Did you hear me? Now!!! Get up!!! Now!!!” I’m fairly certain that my perennial high blood pressure problem developed during this phase of my parenthood.

Finally, Dr. Hartley came to the rescue. One evening, after Amy was in bed and asleep, I told Willie that we were done being human alarm clocks, otherwise known as enablers of the twelfth magnitude. I remember my lovely wife’s response being, “It’s about time.”

The next morning, Amy slept through her first and second classes while Willie and I sat downstairs drinking coffee, reading the newspaper, and chatting about pleasant things. Suddenly, around ten o’clock, Amy burst into the den.

“I’m late! I’m going to have to take at least two finals! Why didn’t you get me up?!!”
I looked up from the paper. “We’re not doing that anymore, Amos.”

By the way, previous warnings to that effect had fallen on deaf ears, so no, we did not warn her of our intent. Nor would we write her an excuse, so despite her sterling academic performance, Amy had to take two or three finals that semester. Amy never overslept again.