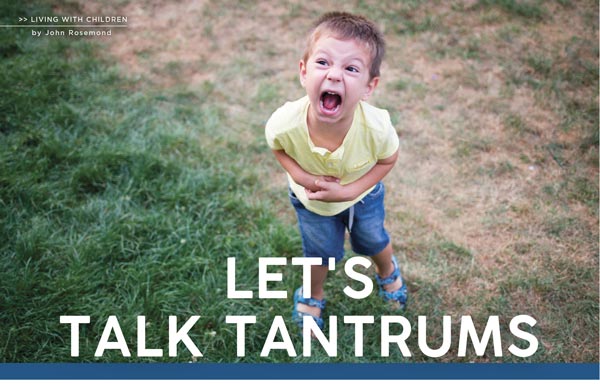 Q: Our four-year-old, an only child, is giving us fits. As a toddler, he began ignoring us. That evolved into downright refusing to do what we ask, as in, “I’m not going to” and just plain “No.” It seems like the nicer we are to him, the meaner he is to us. In addition, his tantrums when he doesn’t get his way have become Class 5 hurricanes that last until we give in. We know we shouldn’t—give in, that is—but his fits just wear us out. There is no doubt that he’s in complete control of our home. Is it too late to turn things around?

A: Not at all, but taking your son out of the driver’s seat is going to require a complete parenting makeover, starting with how you give him instructions.

Two words pop out in your question: “ask” and “nicer.” They may well hold the key to solving your problems. In the first place, asking a young child to do something is akin to lighting a fuse on dynamite. The fact is, you want your son to obey. To obtain obedience, your instructions should be delivered in short, authoritative sentences, as in, “It’s time for you to pick up these toys.” Your desire to be perceived as nice people is understandable, but something along the lines of “Hey, how about let’s pick up these toys now, okay buddy?” gives him tacit permission to respond with something along the lines of “I don’t want to,” which just happens to be the default response for a child your son’s age.

In short, stop asking your son to cooperate and begin telling him exactly what is expected. I call it “Alpha Speech.” Trust me, that alone is going to cut his disobedience in half—if you stick to it—within a couple of weeks. In the meantime, when he disobeys, confine him to his room for thirty minutes, defined by a timer set outside his door. Prior to using his room for time-out, however, you need to reduce its “entertainment value” by at least ninety percent. In other words, make it boring. Alpha Speech and an immediate, meaningful consequence should do the trick, but mind you, things are likely to get worse before they get better. A child who’s in “complete control” of the home isn’t going to sit well when his parents begin taking back that control.

Which brings us to his magnificent tantrums. In that regard, let’s not make things complicated. His room, after you transform it into his boring room, can also serve as his Tantrum Place. Every young child needs a safe place where they can protest not getting their way as long and loudly as they want. Immediately—and that is the key—upon the start of a tantrum, march him to his room with the instruction to stay until there’s no more tantrum left in him.

It shouldn’t take long for your son to discover that disobedience and tantrums are going to get him nowhere fast. When that happens, he will be a much happier camper, believe me.