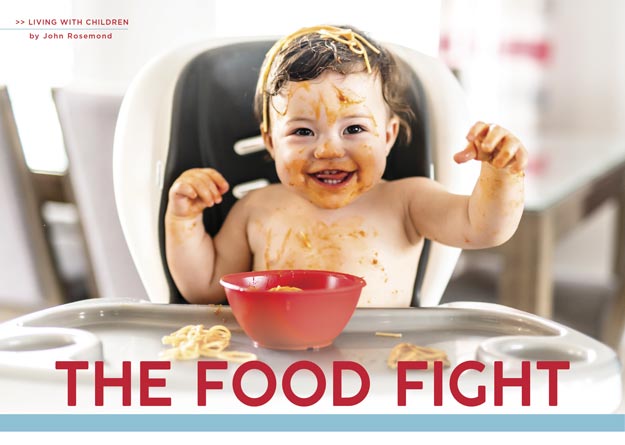 Our 10-month-old son has recently discovered the joys of throwing finger food on the floor at mealtimes. He doesn’t seem to care if I feed it to him myself, one piece at a time, but isn't it important that he start feeding himself?

Not to worry. The emergence of “throwing food on the floor behavior” at this age, especially if a dog is waiting below, is indisputable indication that the child’s development, not to mention sense of humor, is proceeding according to plan.

Give your son one small piece of finger food at a time. If he throws it on the floor, ignore him. Continue eating and talking. When he motions toward the floor, pick up the morsel and give it to him. (My mother always made me eat “floor food,” pointing out that the floor was cleaner than the human mouth. I’m still alive!) Do so with great nonchalance, without saying anything or even looking at him. If he throws it on the floor again, repeat the sequence. When you are finished with your meal, clear the table, including his tray, and let him down. When he is hungry, he will let you know. In which case, feed him. Eventually, this too will pass.

Postscript: The child above is simply taking innocent delight in orchestrating a “dance” during family mealtimes. This is not a discipline problem but if treated as such has the potential of eventually developing into a major battle over food and eating. In fact, mealtime problems have become, in recent years, one of the most vexing of parenting issues. To significant degree, this has to do with the fact that today’s parents tend to pay entirely too much attention to their children during mealtimes. They often treat their children like “superstars” at the table, thus giving them a stage from which to perform. These performances usually take the form of picking at and complaining about food and refusing to eat or acting like anything other than ice cream and French fries triggers an involuntary gag reflex.

I say pay minimal attention to young children during the family meal. Parents should engage in conversation, only occasionally asking children questions that are not food related. As a child grows, he can be included more and more in mealtime conversation, but “table talk” should never be about food, and the understanding should most definitely be that if one cannot say something nice about the meal, one should say nothing at all. Under no circumstances should parents ever prepare a child a separate meal. As my wife and I told our kids, “None of us is more special than anyone else; therefore, no one gets a special meal.”