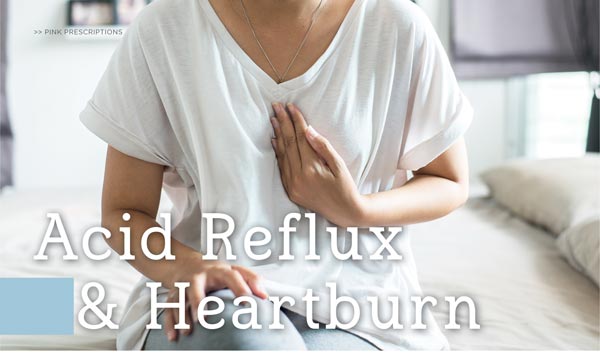 If something is named heartburn, reflux or GERD (gastroesophageal reflux disease), it can’t be good. While usually not life-threatening, acid reflux, and all it’s monikers, definitely can threaten your quality of life. GERD has no respect for decadence on the dinner table, and no one wants to enjoy a delicious filet minion paired with a big, full-bodied glass of cabernet only to have to follow it up with plop, plop fizz, fizz as dessert. So what is GERD and how can you manage it? Read on to comfortably digest what our local medical experts have to say about this uncomfortable condition.

by James F. Gigante, MD
What is happening when I have heartburn.
Is it the same as acid reflux?

The common term heartburn is medically known as gastroesophageal reflux or GERD. The esophagus is a long tube that travels through our chest behind the heart. As it reaches the end of our chest cavity, known as the thoracic space, it passes into new territory—the abdomen by traversing through the diaphragm. The diaphragm is like a tent cover separating these two spaces,  and it has a small opening, which allows the esophagus to travel through it on its way into the stomach. At the very end of the esophagus there is a valve separating the esophagus from the stomach. It is called the lower esophageal sphincter (LES) and is crucial in importance.

Our bodies have exquisitely adjusted acid and base levels everywhere. In our blood, the acid level is close to a neutral pH—7.4 (slightly basic). If that pH changes by just two-tenths of a point—to 7.2 or 7.6—our health crumbles.  The digestive space, however, is unique and protected, as the stomach’s acid content pH can be as low as 1.5 to 3.5 (highly acidic) in order to aid digestion. Anything that causes that “battery acid-like chemical power” to splash from the stomach across the lower esophageal sphincter and into the esophagus, will cause symptoms such as burning, chest pain, bad breath, burping, etc.

One can get pain from heartburn, radiating down the left arm, and such symptoms are never to be ignored and should trigger a call to your doctor right away. Whether it is heartburn, or heart attack, is a complex evaluation of one’s risk, symptoms, history and a doctor’s exam, including an EKG. That is why all patients should have a primary care doctor who knows you well and has a yearly EKG in your records.

The lower esophageal sphincter can fail at its job of separation when vulnerable patients consume alcohol,  carbonated beverages, fatty, spicy or acidic foods. Some patients have congenitally weak diaphragms, where the stomach pokes through the diaphragm, partially living at the bottom of the thorax. Those patients are particularly vulnerable in this condition known as a Hiatal Hernia.

James F. Gigante, MD is a Board Certified doctor of Internal Medicine and a fellow with the American College of Physicians. He has been practicing medicine for 25 years, the last 17 here in the Lowcountry. 843-681-2222; 35 Bill Fries Drive, Bldg H, HHI.

by Dr. Robert Brockman
What are some longterm effects caused by acid reflux if I don’t seek treatment?
Acid reflux causes a burning sensation, or mild irritation, for most people. For some, it can happen more frequently and become a very serious and uncomfortable problem.

Longterm effects may include:
• Possible stricture and narrowing of the lower esophagus, which can cause pain and difficulty swallowing. This could lead to food getting stuck in the lower esophagus, requiring endoscopic removal.
• Abnormal or precancerous changes of the lower esophagus lining due to chronic exposure of stomach acid. In severe instances, this can sometimes lead to cancer.
• Chronic upper respiratory irritation from gastric acid entering the lungs, particularly at night, causing chronic cough and sometimes laryngitis.

How can I distinguish heartburn and a heart attack?
Heartburn, despite its name, has no relation to your heart. It is a common symptom of acid reflux, causing stomach acid to irritate your esophagus.

Typically, symptoms include:
• Sharp, burning sensation located in the chest or throat
• Occurs after eating, drinking, or lying down
• Occasionally accompanied with a sour or bitter taste in your mouth

Heartburn may last a few minutes, hours, or possibly even a few days. It is typically relieved with antacids, sitting up and belching.

Heart attack signs and symptoms can differ significantly from person to person and even between men and women.

Typically, symptoms include:
• Sudden, crushing pressure or tightness in your chest
• Pain or discomfort in your arm or shoulder
• Shortness of breath
• Jaw, neck or back pain
• Lightheadedness, nausea or vomiting
• Cold sweats

If you’re uncertain whether it’s a heart attack or heartburn, do not hesitate to receive further evaluation. If you think you may be experiencing a heart attack, immediately call 9-1-1 and go to the emergency room.

Dr. Robert Brockman is a board-certified general surgeon with over 29 years of experience. He is board certified with the American Board of Surgery. Dr. Brockman has extensive experience in all fields of General Surgery and Vascular Surgery, both arterial and venous. He has offices in Bluffton, Hardeeville and Okatie.

by Dr. Richard Stewart
Is acid reflux triggered more by the quantity of food, or the type of food?
Both can contribute to worsening reflux. It is difficult to say which is more of a risk, as both overeating and certain foods can cause relaxation of the lower esophageal sphincter muscle. This sphincter muscle has been implicated as the most common contributing factor in people who suffer with reflux.
Occasional reflux is normal and can happen in healthy individuals after eating a meal. However, patients with reflux disease experience consistent bothersome symptoms related to their reflux. This appears to be related to increased number of transient relaxations of the sphincter muscle. We are not exactly sure why this happens, but we know it happens more often in patients with reflux and can be associated more often in patients with a hiatal hernia and/or obesity.

Specific items which have been shown to increase these transient relaxations include excessive caffeine, chocolate, alcohol, peppermint and fatty foods. In addition, there is some variation from person to person as far as other types of triggers, such as spicy or acidic foods. Tobacco has also been implicated in increasing the episodes of lower esophageal sphincter relaxations.

Lifestyle changes that may help with reflux include losing weight, raising the head of your bed six to eight inches, avoiding the above listed foods, avoiding late night snacks or meals and quitting smoking. However, if you develop symptoms such as unexplained weight loss, difficulty swallowing, or signs of gastrointestinal bleeding (such as dark or tarry stools) you should seek medical attention.

My infant spits up a lot, can children have acid reflux?
The answer to your question is yes, children can have reflux disease. Physiologic or normal reflux is extremely common in healthy infants. These episodes, which sometimes are associated with “spitting up,” typically decrease after six months of age and are unusual after 18 months. However, one study found that infants having continued regurgitation after six months showed an increased incidence of reflux in later childhood.

It is worth noting that breast-feeding may have a protective effect on regurgitation in infants. It is theorized that this may be related to an intolerance to proteins in cow’s milk, soy milk, or other formulas. Other measures, which may help decrease the incidence of reflux, include avoiding tobacco exposure, avoiding overfeeding and keeping the infant upright for 20 to 30 minutes after feeds on the parent or caretaker’s shoulder.

If the infant or child develops intractable regurgitation, refusal of food, symptoms of heartburn, difficulty swallowing or breathing, or chronic hoarseness, medical attention should be sought.

Richard Stewart, D.O., is a Beaufort Memorial board-certified gastroenterologist. A graduate of the University of Medicine and Dentistry of New Jersey, Dr. Stewart sees patients at the Lowcountry Medical Group in Beaufort and at the Okatie Medical Pavilion in Okatie. He can be reached at 843-770-0404.