Kudos to Ron and Rebecca Tucker, co-founders of the Beaufort Film Festival. This amazing team and their organization presented a heck of a festival in February.

The Lowcountry is a film-friendly region. For nearly half a century Beaufort has served as the backdrop for more than 20 major motion pictures, including Forrest Gump, The Big Chill, The Prince of Tides, and many more. With our sweeping marsh vistas, antebellum homes, and quiet charm of the Old South, it’s no wonder it has drawn filmmakers.

The Reel Corner had the opportunity to attend a question and answer session, featuring one of the February festival’s award-winning filmmakers, Jim Picariello. A real crowd pleaser, Jim’s film, Passive Aggressive Dads, had the crowd engaged and responding more than any other in the short film comedy category. At the Q&A with Jim, his honest and comedic responses brought the crowd almost to a standing ovation. 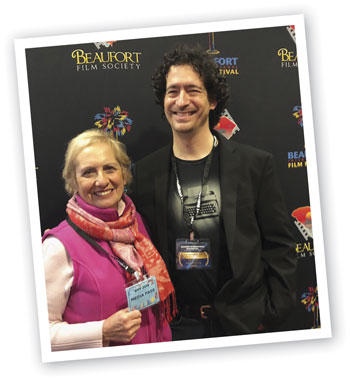 Jim Picariello is a Maine-based screenwriter and filmmaker. He wrote, produced, and acted in a four-minute short film This Time It’s Shopping, which was selected by 17 film festivals and won five top awards. (Link to video: https://vimeo.com/13509921)These wins attracted the interest of the producers of the television show “Sesame Street”, and Jim’s subsequent Maine-based short film The Number 6 premiered on HBO’s “Sesame Street” in early 2018.

Passive Aggressive Dads is a slightly twisted short film about two middle-aged fathers, who just want to spend a quiet day with their daughters at the park. But when an obnoxious group of teens drive by too fast and too loud, it spurs these aging, disgruntled dads into a self-righteous act of passive-aggression. The film is a darkly comic, revenge-fantasy for all of us who long to take life’s frustrations out on the young, who mock our most basic social conventions with their happy ignorance.

When he’s not making short films, Jim works as an Instructional Designer at the Maine Maritime Academy, where he drives the effort to create internally-developed VR/AR technical simulations. Jim lives with his wife and two teen daughters in rural, coastal Maine, where the mountains slope into the ocean, and his kids can play with the neighborhood’s baby farm animals. He acknowledges it’s not the most strategic place to launch a screenwriter/filmmaker career, but it’s a great place to raise a family. Congratulations, Jim! I predict you to be well on your way to more film awards. (http://jimpicariello.com)

At the Oscars this year, Best Documentary Feature went to Free Solo. I was so impressed by this film, I thought I’d mention it. Directed by Elizabeth Chai Vasarhelyi, Free Solo showcases professional rock climber Alex Honnold as he attempts to conquer the first free solo climb of famed El Capitan’s 900-meter vertical rock face at Yosemite National Park. This is daring, dangerous, and dizzying stuff, which is the story of one man in competition with nature. It is incredibly photographed by Andrew Berends. If you missed Free Solo in theaters, the National Geographic Channel will be running it on TV.

If you love films and appreciate the fine art of motion picture storytelling, support your local film festivals! Our next local festival is SCAD Film Festival, which takes place October 26 through November 2.