HomeElizabeth’s BlogHissy Fit - November 2021 - Get Off the Phone: And Save the Children
Edit Item 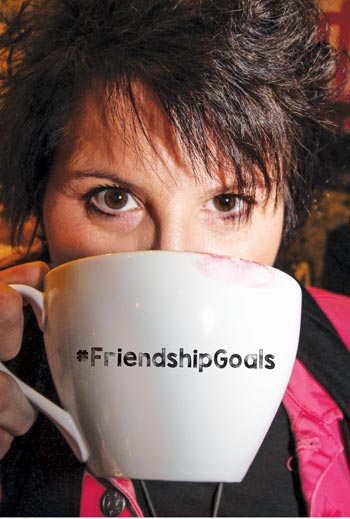 I grew up in a household where friendships were revered. Almost every Friday night my parents would hang out with their friend group and whoop it up. I got dragged along well into my teenage years but, for the most part, I didn’t mind because their friends had children who also got dragged along. Us kids would play, while our parents did the same. We also rarely went to to the lake or the beach without friends or family joining us. To say the least, the importance of friendships was ingrained in me as the key to fun.

My dad, the ultimate extrovert, comedian and life of the party, was our family’s leader of generating friends. It was easy for him because not only could he talk to anyone, he did. The other part of the formula was he immersed himself in many situations to meet people and grow friendships. Most of our family friends were either from Dad’s work, the National Guard, the Masonic Lodge, the Shriners, the Eastern Star, the Amaranth or were friends from his childhood. (I bet you haven’t heard of some of those organizations in a long time.) When he turned 70, we held a roast for him and 200 people came.

With the example my parents set, I naturally followed suit. I was lucky to have lots of friends at every age, even though girls came and went over the years. I was fortunate to get a touch of my dad’s way with people, and have found making friends pretty easy. However, I understand that it doesn’t come natural to everyone, though I wish it did. Friendship, and all it encompasses, is one of the best things on earth—laughter, joy, fun, trust, connection, adventures, craziness and so much more.

In trying to analyze my father’s magic touch, I think there are a few things that made it easy for him, which we can all learn from.

Lack of fear: Dad didn’t care if you liked him or not, though most people did. He had friends and acquaintances from all walks of life. I mean, he was a blue collar guy, and his best friend was a lawyer and SC state senator.

He was always himself: No matter who he was talking to, he was the same. He didn’t put on airs—ever. He was the epitome of “what you see is what you get. I believe people like and respect knowing people are real.

Heart of Service: Dad was always willing to help people. He was the kind of guy who would show up to help if you were building a fence, fixing your car or moving your kid to a new apartment. In return, people showed up for him, too.

He did his part: He always said, “You get out of something, what you put into it.” In other words, effort in equals effort out. This is true in friendships; you have to do your part. If you never call your friends to check in, make plans, or simply let them know you remember they are still on the planet, the friendship is going to fizzle. Dad was great at keeping in touch with everyone. I don’t know how he did it, but he had party plans every single weekend.

He was open minded: Dad didn’t mind trying new things. He wasn’t dead set on having to go to certain restaurants, he liked to dance, he included new people, one time he even went to ceramics. If you knew my dad, you would never believe it. But he did, and I have the pair of frogs with anatomically correct genitalia to prove it.

He avoided building up anger: My dad had friends who were around all my life. That kind of longevity takes getting along, and let me tell you, my dad could be feisty and opinionated. He and his buddies had some heated conversations but then it was done—no stewing, no calling other friends and talking about them, no grudges, no build up, basically, no drama. It works.
He made people feel good: Maya Angelou said, “People will forget what you said, people will forget what you did, but people will never forget how you made them feel.” My dad was fun and funny. People laughed a lot when they were around him. He knew people every where he went. He took time to carry on interesting conversations. He wasn’t a small talk guy. He cared if others were having a good time. His energy made people feel lighter. People still talk about him and what a character he was. He made people feel good.

I am blown away right now because I had never processed how much influence my father had in teaching me not only how to make friends, but also how to be one. In looking back at what I had always taken for granted, I realize how grateful I am for his personification of how to win friends and influence people—and he never even read the book! He had no clue he had friendship superpowers. It was just who he was, and like I said, what you saw is what you got—a true friend.

I am thankful to you for reading and loving Pink. You have no idea how much it means to me. I hope you and your loved ones have a wonderful and happy Thanksgiving—let’s eat some pumpkin pie!

(And, you can’t miss this month’s Pink Partini—see page 4; it’s going to be fabulous. Call your friends and/or meet some new ones!)